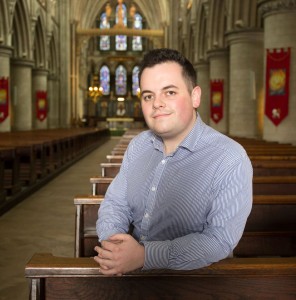 Daniel Justin is the Director of Music for the Diocese of East Anglia, and Master of Music at the Cathedral of St John the Baptist, Norwich, a post which he took up in 2015. This role takes him across the Diocese, which covers Norfolk, Suffolk, Cambridgeshire and Peterborough, with primary focus on the music making in the Cathedral, where he has established a foundation of 21 Choristers, 8 Lay Clerks and Choral Scholars, and a group of voluntary singers, who sing across the Sunday Masses and Vespers and Benediction, and at weekday Solemnities and Feast Days.

Born in Bristol, Daniel won a music scholarship to Downside School in 2000, and studied the organ with Christopher Tambling and Dr David Bednall. He continued his studies at The University of Huddersfield with Professor Graham Cummings, graduating in 2011 with a BMus (First Class honours), and in 2012 with a MMus (Merit). Daniel focused his postgraduate study towards improvisation, returning to study in Bristol with Dr Bednall. Daniel held the Organ Scholarship at Wakefield Cathedral, working for a year as Assistant Director of Music, before moving to Leeds Cathedral as Assistant Organist in 2011, where he became Cathedral Organist in 2013.

Daniel has played live on national television, and on BBC Radios 2, 3, and 4. Recitals have taken him to Leeds Town Hall, Liverpool Metropolitan Cathedral, The Colston Hall in Bristol, The Queens’ College Cambridge, Norwich Cathedral, and Westminster Cathedral. His playing can be heard on CDs from Wakefield and Leeds Cathedrals, more recently as an accompanist on the Brilliant Classics release of the complete choral works of Maurice Duruflé, a CD of the Choral music of Arvo Part, and a CD of Catholic Hymns. His debut solo CD of the Complete Original Organ Works of Sir Edward Elgar was released at the beginning of August 2015. Daniel is also active as a composer, past commissions include a complete Evensong setting for the University of Notre Dame, Indiana USA. His compositions are published by Morningstar Publications, a branch of EC Schirmer. 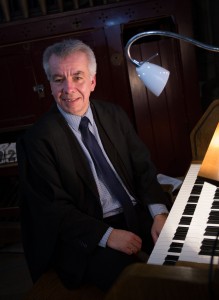 Additionally, Neil has been in demand as an accompanist, accompanying numerous local choirs, as well as instrumental soloists and professional jazz musicians/singers. Neil has also pursued a solo career performing with the Norwich Mozart Orchestra and is a regular recitalist on the cathedral circuit. His playing has been broadcast by the BBC on numerous occasions.